I’ve heard about social networks censoring content, but I always thought it only affects hate speech or promoting violence. I never expected that my opinions could end up in the same bucket as stirring violence. And I’m perplexed by the way Facebook decides what you can and can’t talk about with your friends.

UPDATE(2021-02-08): Today I was able to share this blog through Facebook. So the situation described bellow is no longer happening. That doesn’t change my sentiment towards Facebook though.

A few weeks back, I was messaging with my ex-colleague and a good friend. We haven’t talked to each other since I started writing this blog and so, naturally, I wanted to brag, and I sent him a link.

The message didn’t send. Tapping for details didn’t work1. I thought it has to be a network issue. I opened my laptop and tried to send the message through the Facebook website.

I couldn’t believe my eyes. Facebook won’t let me message my friend because it doesn’t agree with the content of my message. This private message censorship is both sad and hilarious at the same time.

It’s hilarious because it proves the point I was making about end-to-end encryption being necessary when I talked about the Signal messaging app. It’s nobody’s business to know what I’m discussing with my friends. Spying on my messages is one thing, not allowing me to send them at all is whole another level.

First, I don’t rely on my site for making a living, but if I did (as so many of you do), then my livelihood would be damaged. There’s no way of knowing which of the plethora of vague Facebook Community Standards are you allegedly breaking.

Second, not all of my friends are on Signal, and so I sometimes have to talk about my site as viktomas[dot]com. It hurts every time I type that into a Facebook message.

Third, this happens retrospectively2. If anybody posted or talked about this blog, Facebook went and deleted those messages, rewriting history.

There is a dispute process that doesn’t work. You can send Facebook a note saying that you think they made a mistake, but your message goes straight to /dev/null.

They’ll even tell you that they “won’t have a look at your report”: 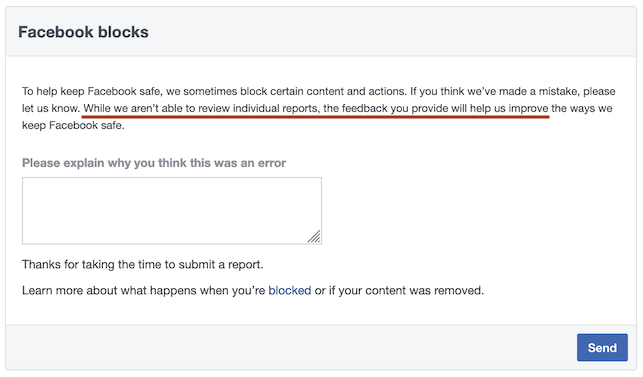 I understand that a service with 2.7 billion users3, can’t handle individual requests. But then they should be a bit more transparent about the reasons why their algorithm blocks your site so you can decide whether you let Facebook dictate your content or not. Facebook designed non-transparent censorship, and it doesn’t allow users to contest the decisions. Dreamwidth co-owner xb95 says it the best:

[It’s] a bit of a /shrug moment on the subject itself. “Facebook gonna Facebook” I think is approximately how we feel about this.

I even found advice recommending to change your domain.

Others having the same issue

But the majority of the cases ends up without any resolution. Not many people have the privilege of having friends with friends in the Facebook support centre.

When I was in my early twenties, still at uni, Facebook banned me without any explanation. I lost tens of connections to acquaintances that I never recovered. I got burnt, and I haven’t had a Facebook account for years after that. But eventually, after the services I used (Whatsapp, Instagram) got one by one acquired by Facebook, I gave in. I started another account with a different email so I can talk to people who aren’t on Signal or Whatsapp. I wish I could do without it.

Thought exercise exploring a way of storing secrets on the internet.

After writing about privacy and security in general, this is the first time I’m going to be talking about a specific solution. Full disclosure: I’m not a security professional, more of an …